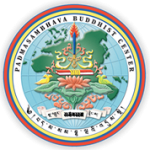 Khenpo Tsewang Dongyal Rinpoche was born in the Dhoshul region of Kham in eastern Tibet on June 10, 1950. On that summer day in the family tent, Rinpoche’s birth caused his mother no pain. The next day, his mother, Pema Lhadze, moved the bed where she had given birth. Beneath it she found growing a beautiful and fragrant flower which she plucked and offered to Chenrezig on the family altar.

Soon after his birth three head lamas from Jadchag monastery came to his home and recognized him as the reincarnation of Khenpo Sherab Khyentse. Khenpo Sherab Khyentse, who had been the former head abbot lama at Gochen Monastery, was a renowned scholar and practitioner who lived much of his life in retreat.

Rinpoche’s first Dharma teacher was his father, Lama Chimed Namgyal. Beginning his schooling at the age of five, he entered Gochen Monastery. His studies were interrupted and his family had to escape to India. In India his father and brother continued his education until he entered the Nyingmapa Monastic School of Northern India, where he studied until 1967.

Khenpo Tsewang Rinpoche has authored two books of poetry on the life of Guru Rinpoche, including Praise to the Lotus Born: A Verse Garland of Waves of Devotion, and a unique two-volume cultural and religious history of Tibet entitled The Six Sublime Pillars of the Nyingma School, which details the historical bases of the Dharma in Tibet from the sixth through ninth centuries. At present, this is one of the only books written that conveys the Dharma activities of this historical period in such depth. Khenpo Rinpoche has also co-authored over 25 books in English on Dharma subjects with his brother Khenchen Palden Sherab Rinpoche, including Ceaseless Echoes of the Great Silence: A Commentary on the Heart Sutra; Prajnaparamita: The Six Perfections; Door to Inconceivable Wisdom and Compassion; Lion’s Gaze: A Commentary on the Tsig Sum Nedek; and The Buddhist Path, all of which are available online at the PBC Pemai Chiso Dharma Store.